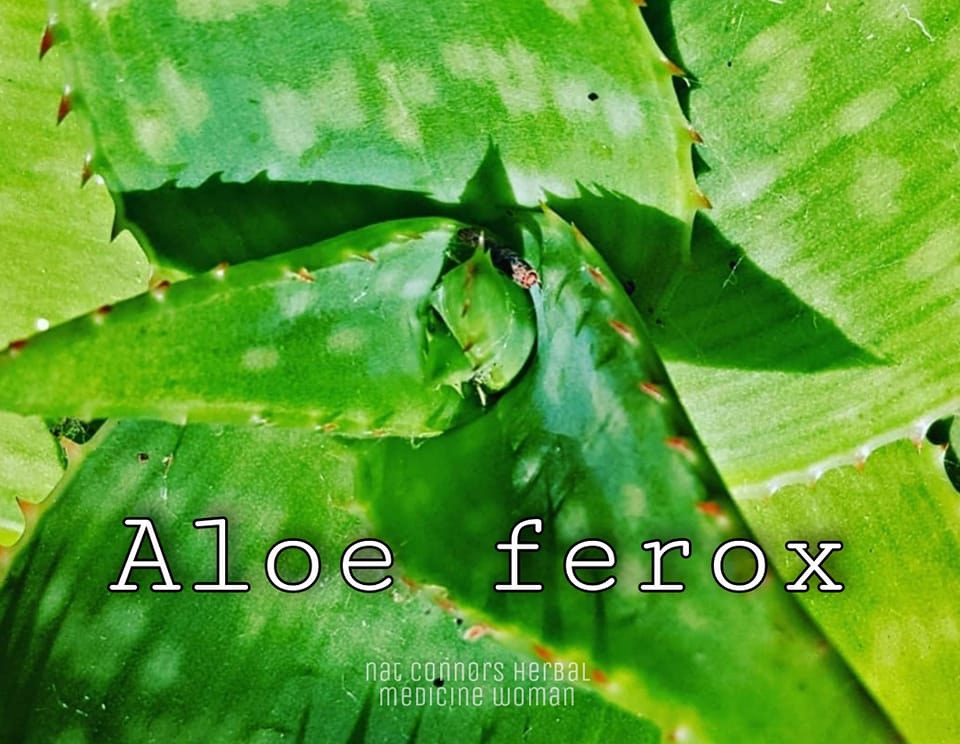 Aloe ferox often described as the “Grandfather of Aloes” some growing up to 5mtrs tall!  Aloe is possibly one of the most well known and oldest plant remedies in the world!  Originally found in tropical areas of Africa, enjoying the rocky well drained terrain where it was used as an antidote to poison arrow wounds. Regarded as an excellent cooling tonic in India, and favoured during the middle ages as a purgative.

There are hundreds of varieties of Aloe, many listed as endangered. Aloe vera being one species that is not listed,  allowing it to be propagated world wide to supply the medical and cosmetics industries. Aloe vera is similar to Aloe ferox, with ferox being many more times nutritional and medicinal than Aloe vera.

When you peel back the Aloe leaf you will be presented with the yellow bitter sap, and clear mucilaginous gel. It is the bitter sap that contains the purgative qualities.

The fresh gel can be used topically, or place 2 tsp into a glass of water as a tonic, or boil the gel into a thick paste to be used as an ointment.  Aloe is readily available on retail shelves as a juiced concentrate, powdered or as an ointment and features as a part of many skin care products. In India they also like it fermented with honey – known as Kumaryasava a tonic for treating anaemia, poor digestion & liver disorders.

Beautiful as an ornamental with magnificent bright red or orange flowers, that may attract bees and birds to the garden.

?️ May help to increase Menstrual flow in small doses – avoid during pregnancy or breastfeeding.

If you would like to know if Aloe ferox could benefit you or your families health,  reach out to your Naturopath or Herbalist today.

Or book a chat with Nat on this link.